The 'keycap digit eight' emoji is a text-based symbol that has been around since Unicode V3.0, and should be supported by just about every device and browser. As a standard symbol, you should also be able to copy and paste the 'keycap digit eight' symbol (or the HTML entity &#x0038 20E3;) in your browser or on social networking sites like Facebook and Twitter.

On many devices, you can use the shortcode :eight: to add the keycap digit eight emoji to your messages.

Different devices may have different versions of the keycap digit eight emoji. The chart on this page shows how this emoji is displayed on Android, iOS, and other platforms.

To use 'keycap digit eight' on social media like Twitter, Facebook, or Instagram, you can copy the emoji character on the left. This is a special character, not an image, so it can be used anywhere.

How does the Keycap Digit Eight emoji look across different devices? 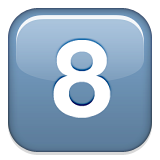 Note: The emoji 'Keycap Digit Eight' is, by default, a two-part symbol represented by two distinct Unicode characters (U+0038 and U+20E3). Separately, these characters are rendered as 8 and ⃣.

Why does this emoji show up as a blank box (򪪪) or an X?
Not all emojis are supported by every device. If you are trying to view an emoji your device doesn't support, you will see a blank white box or similar symbol (򪪪) to represent a character your device doesn't understand.
How can I use this emoji on my social media accounts?
Facebook, Twitter, Instagram, and most other social networks have built-in support for standard emojis that can be accessed through a menu. You can also copy and paste the text version of the keycap digit eight emoji (8⃣) into your social media posts. Keep in mind that not everyone sho sees your post may have support for these emojis, and Twitter and Facebook limit the emojis you can use in your name and description.