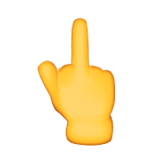 The 'reversed hand with middle finger extended' emoji is a special symbol that can be used on smartphones, tablets, and computers. Your device needs to support this particular emoji in order for you to be able to use it, otherwise the emoji may not appear.

Different devices may have different versions of the reversed hand with middle finger extended emoji. The chart on this page shows how this emoji is displayed on Android, iOS, and other platforms.

Warning: Reversed Hand With Middle Finger Extended is a brand-new emoji introduced in 2014 as part of a batch of 250+ new emojis added to Unicode 7.0. Because this emoji is so new, many devices may not support this emoji until it a new software version is updated to include it.

To use 'reversed hand with middle finger extended' on social media like Twitter, Facebook, or Instagram, you can copy the emoji character on the left. This is a special character, not an image, so it can be used anywhere.

How does the Reversed Hand With Middle Finger Extended emoji look across different devices?

Why does this emoji show up as a blank box (򪪪) or an X?
Not all emojis are supported by every device. If you are trying to view an emoji your device doesn't support, you will see a blank white box or similar symbol (򪪪) to represent a character your device doesn't understand.
How can I use this emoji on my social media accounts?
Facebook, Twitter, Instagram, and most other social networks have built-in support for standard emojis that can be accessed through a menu. You can also copy and paste the text version of the reversed hand with middle finger extended emoji (🖕) into your social media posts. Keep in mind that not everyone sho sees your post may have support for these emojis, and Twitter and Facebook limit the emojis you can use in your name and description.